I have teamed up with the wonderful Abergavenny Food Festival Team to give my readers the chance to win a pair of wristbands for this year’s Abergavenny Christmas Fair, allowing access to the yuletide markets and demo stage in the Market Hall, for the whole day.

The Abergavenny Christmas Fair is coming to town!

On Sunday 10th December from 10am till 5pm, the Market Hall in Abergavenny will be filled with the tastes and aromas of Christmas and a lot of festive cheer as the Abergavenny Christmas Fair comes to town. There will be over 85 stallholders with festive food and gifts for sale across the Market Hall, Upper Brewery Yard and the Priory. Back in the Market Hall there will also be Christmas decoration making fun for the kids and festive menu tips from a glittering demo stage line up of culinary experts including MasterChef quarter-finalist Imran Nathoo, top chef Tommy Heaney, Guardian gardening journalist Lia Leendertz, and expert forager Liz Knight. You can even jump in Santa’s horse and carriage at The Angel Hotel! Don’t miss tasting workshops at Homes of Elegance too – there’s more about tickets for these and info on the Christmas Fair on abergavennyfoodfestival.com. 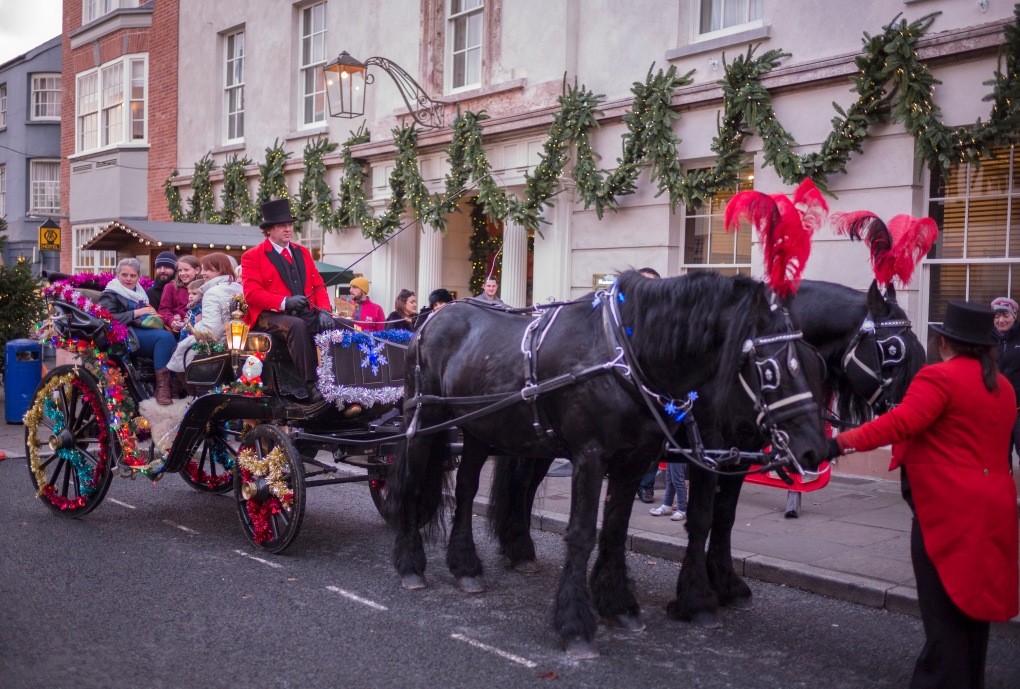 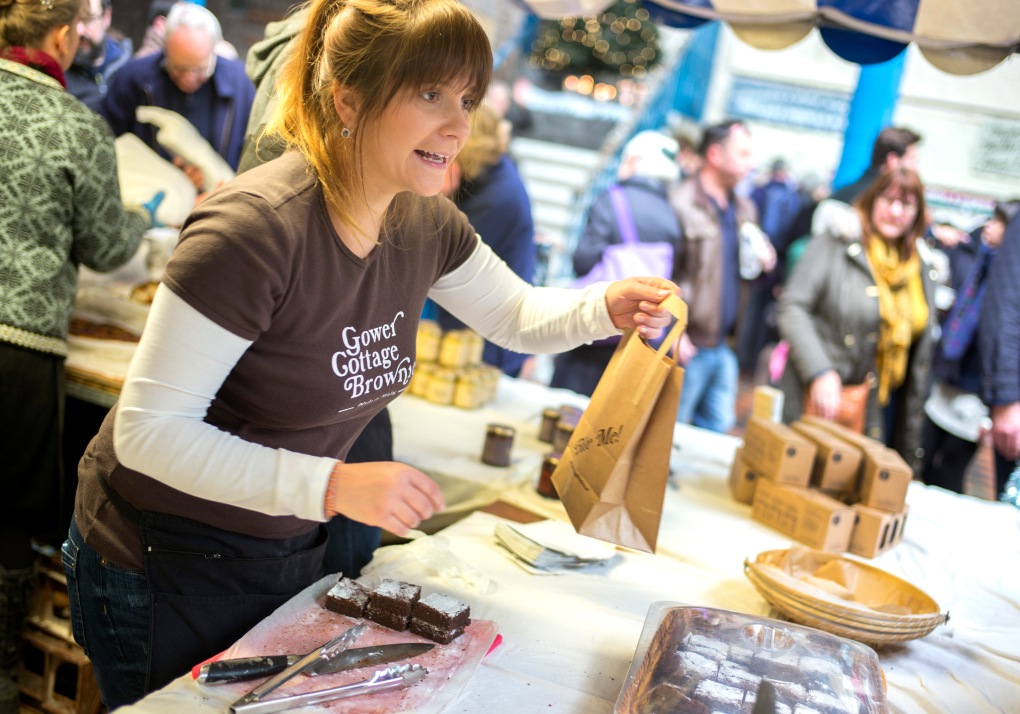 Terms and Conditions from the Abergavenny Christmas Fair:
Wristbands are non transferable and only valid for the Abergavenny Christmas Fair in Abergavenny, Sunday 10th December 2017, between 10am – 5pm
There is no monetary alternative
Wristbands will need to be collected at the Box Office on the High Street (Red Square) in front of Neil Powell Butchers
Horse & carriage rides at The Angel Hotel are costed separately at £5 each and are available between 1pm-5pm on Sunday 10th December
Tickets for tasting workshops at Homes of Elegance need to be purchased separately
Children go free with a paying/winning adult (i.e. these competition wristbands can be used by 2 adults and 2 children can accompany for free)
1 Comment November 10, 2017 Hannah Freeman

choice in Monmouthshire, Herefordshire and Gloucestershire. I really enjoy visiting Christmas food festivals, they help get over the post Bonfire Night hump and provide the ideal excuse for a cheeky mulled wine or two, not to mention huge present shopping potential .

I have chosen five of my favourite (most) local festivals to take you through to the big day; already we have seen a couple of frosty mornings so here’s to winter and all it throws at us. These are not purely food festivals, many offer local crafts, musical entertainments and great street food; everything you need to get you into the festive spirit. 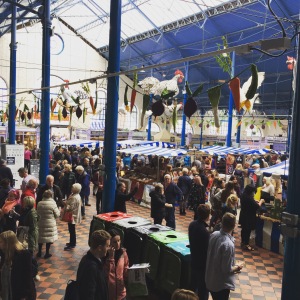 The largest local Christmas Fair, Abergavenny Food Festival always holds the banner high when championing regional and artisanal produce. Two weeks before Christmas Day will find the Market Hall, and surroundings, packed with delectable festive delicacies, an excellent time to stock up on foodie gifts, drinks for those  Christmas Parties or nibbles for surprise guests. As always, expect the best of the best; it’s a great place to stock up on Christmas Sprits whilst putting you in the Christmas Spirit. There are several workshops and feasts taking place too, so please see the website for more details.

heart of The Forest of Dean, a fairytale setting for any Christmassy event. There will be stalls, demonstrations, workshops, live music and children’s activities. Tickets cost £3 for adults and £2 for children, family tickets are also available. Expect local cider, festive bakes, local meats and cheeses and a plethora of yuletide goodies.

“The Hereford Food and Advent market will be a fun festive day out for all the family. Held at Hereford Racecourse on the 2nd and 3rd December 2017 from 10 am – 4pm. Cost £2 entry for adults and £1 for children . FREE parking.
We have a huge variety of food and drink suppliers and live music, where you can have lunch under a covered marquee area, and enjoy the German Christmas market atmosphere.
You can browse and purchase all sorts of Christmas gifts and visit Santa in his grotto. ( extra charge of £5 will apply )
Also available will be free craft workshops for adults and children, included in the entry price.
In addition we have a children’s creative workshop, run by The Creation Station where they can have fun with plate art, and Christmas baubles . Please visit the website and Facebook for details of The Christmas Keepsake Workshop.
Also available are fabulous Christmas wreath making workshops with Debbie from the Hibiscus rooms.”

Gloucester Quays is a prime example of thoughtful regeneration. The docks, once one of

the busiest in England, went through a period of decay until being reborn as a fabulous tourist attraction offering everything from pubs, restaurants and bars through to designer shopping and even canal boat hire. The Victorian Christmas market is very beautiful, the little wooden booths offering gifts, regional foods, mulled wine, arts and crafts. It’s a lovely place to visit as dusk falls, when the Christmas lights reflect off the calm waters of the dock and, with a glass of mulled cider in hand you can explore this, most historic, of sites.

Taurus Crafts, near Lydney in Gloucestershire is part of The Camphill Village Trust, a charity which offers support and a community environment to people who may struggle with everyday challenges. Founded in Scotland, in 1939, the charity aims to help all, regardless of disability and its Taurus Crafts based community is a testament to its success. The Christmas Fair offers a holistic festive approach; food, drink, gifts, crafts and Christmas trees can all be found alongside music, choirs and activities. Full of little workshops and unusual, quirky stalls, Taurus Crafts is a really lovely place to pass a few hours being at one with Christmas, sipping hot chocolate and tucking into one of their delicious homemade cakes.

Bonfire Night; the air is filled with woodsmoke, a hint of sulphur remains from the

recently released fireworks. The sparklers have sparkled and now, hunger strikes. What better warming winter dish to turn to than the humble British banger? A childhood favourite, steaming from the barbecue and tucked into a pappy white roll, maybe a few sweet and sticky onions and, of course,  an obscene amount of tomato ketchup, the Hot Dog, ‘English style’ is most synonymous with this time of year. In celebration of this humble foodstuff #nationalsausageweek has been held annually showcasing the best and most inventive sausages around, this year, however it’s #UKsausageweek

There has always been regional variation in sausages, spice blends and the addition of various herbs have been part of sausage culture for centuries however in the past couple of decades flavours have become far more interesting, varying from the sublime to the ridiculous. Personally, I don’t think you can beat a good old breakfast sausage however it depends on exactly what one is serving it with.

For the traditional mash and onion gravy combo I like a flavoursome banger; pork and leek or pork and apple. We are extremely lucky in my region as we have some really excellent butchers, farm-shops and small-holders selling directly to the public. In a previous post I expressed my enthusiasm for the wonderful pork from Monmouthshire’s Decent Company, but within ten miles of my house I can find everything from Gloucester Old Spot and Cider, to Lamb Merguez Style, Wild Boar and I’ve even seen Squirrel. There are those flavoured with chilli, truffle and cheese; one extremely delicious flavour is Black Pudding and Gloucester Old Spot.

There is nothing more depressing than staying in a B and B, or Hotel and being served a fine textured, slurry-esque breakfast sausage with your bacon. I want a decent banger and a good sausage often makes or breaks a weekend break! The supermarkets are coming closer to the mark, and British outdoor bred pork does have a higher welfare standard than the factory farms found in many parts of Europe. We do, of course, have such shameful secrets here, so I try to seek out butchers who provide free-range pork which is local and, in many cases, rare breed or heritage.

These I will pull into the sausage category even thought some are technically a ‘Pudding’ – all certainly deserve a mention. In Northern Ireland, Hugh Maguire’s fabulous Smoked Black Pudding was awarded supreme champion in the much coveted national Great Taste Awards 2017. In Cornwall and the South West Hog’s Pudding is a delicious and now rather rare treat – do seek it out if you’re in the area. Scotland’s famous Lorne Sausage is made with beef, the dense, seasoned,  meaty squares playing a leading role in the Scot’s Cooked Breakfast.

England is extremely famous for the ‘Cumberland sausage‘, coiled and highly flavoured, and often served with the redcurrant and orange based Cumberland Sauce. Each county has its own variety. Amongst others, there are Suffolk Sausages, Wiltshire Sausages and Glamorgan Sausages (a poor man’s recipe of the 19th century where Caerphilly cheese, leeks and breadcrumbs made a tasty, and a now fashionably vegetarian supper dish). One local charcuterie make a wonderfully decadent German-style wild boar black pudding sausage from the wild boar found in the Forest of Dean.

Of course, traditional British cookery and sausages often go hand-in-hand. We have Toad-in-the-Hole,  Bangers and Mash, Sausage Casserole – to name a few. These are real comfort foods and form the basic recipes for many winter suppers.

Last week I used some fabulous spiced lamb sausages to make a pseudo-tagine with chick peas, preserved lemons and some sweet potatoes to bulk it out a little. The sausages were dense and meaty, no fillers or msg needed.

So, in celebration of #UKsausageweek , here is a little run down of my top five traditional sausage recipe ideas, tweaked for variety;

1) Wrap the sausages in streaky bacon and fry to colour, before adding a Yorkshire pudding batter into which a little sage has been infused.

2) How about trying a chilli flavoured sausage set into a batter of cornmeal and eggs; a Tex Mex twist on Toad-in-the-Hole which works really well with a good dollop of Salsa and Guacamole on the side.

3) Make a creamy root vegetable mash with seasonal parsnips and serve with a fruity banger, Pork and Pear, or Pork and Apple; or a plain well-seasoned sausage and a little apple puree beaten into the mash

4) Skin the sausages and make into tiny meatballs, adding a little crushed fennel seed, bake or fry and add to a traditional Italian tomato sauce. Serve with spaghetti for meatballs sausage style.

5) Skin four different complimentary flavours of sausage, layer into a terrine mould and bake until brown and sizzling for an easy meatloaf. This is also delicious served cold with salads and a good puddle of strong English mustard.

There is no doubt that sausages are a constant crowd pleaser, they weren’t rationed in the war (although were difficult to get hold of), and every country in Europe has their own variation; so this week why not expand your sausage horizon and think out of the box – the British Banger is here for the duration!