So, this week saw the end of National Cake Week, the beginning of National Seafood Week and tomorrow we look forward to the start of British Egg Week. Whilst I enjoy these specialised food and drink weeks it does make me wonder how on earth the British food industry survived for all those years without national annual promotion. Whilst these ‘weeks’ generally fall into place at the peak or opening of the season, some items are in season continually (and in the case of Cake week, it was initially established to share and enjoy a cake together), I look back and try to understand where the British food industry went wrong with seasonality. One hundred years ago, you knew that if it was December there were no strawberries and if it was August, Mussels were generally off the menu.

The only area within which we can categorically state that there is definite seasonality in the UK is through the various Game seasons.

The nostalgia and traditions which surround Game have managed to survive, unchallenged into the twenty first century, and so, today, many people still ‘look forward’ to the first Pheasant, Partridge or Grouse (the glorious 12th a testimony to this). Another example is the relatively new (1951), seasonal arrival of  Beaujolais Nouveau on the third Thursday in November, but the general non-foodie populous are not privy to such seasonal excitements.

Perhaps this is where National Food Weeks come in? When my Grandmother was born in 1911 and yes, she’s still with us today, the seasons were heralded by the changing foods available in markets and shops. People waited almost a whole year for the first Scottish Raspberries or English grown lettuces, hot houses did exist but mostly for the rich. There has been a distinct reversal in the ensuing years. Those with money can seek out the very best of seasonal produce whilst those on budgets can buy ‘year round’ mediocre quality items from the local supermarket.

As a budget conscious nation, we have been told to buy seasonally to save money, even I have advocated this, however on closer inspection perhaps my encouragement is mis-worded. What I should say is, “when buying at specialist food shops, farm shops, farmers markets or similar try to buy seasonally because it proves far better value and generally you reduce your purchases’ food miles”.  This is where the quality issue comes in. In my earlier piece about Organic food  #feedyourhappy I recommended seasonal buying and I do stick by this. 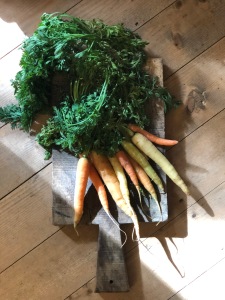 I do, however, think it’s sad that we’ve lost the excitement of seasonality, those of us who produce our own foods know all too well the “No….I can’t manage another strawberry” and the  “We’ll just make jam, now” scenarios after a glut of fruit. We have eaten our fill are are quite happy to wait, in the most, another year for more fresh, sweet, glistening berries. That’s why opening a jar of summer Strawberry Jam in the middle of Winter is so evocative. It is the very fact that it is the preservation of summer which makes it ‘special’ – but that aside, it is not fresh produce like the little trays of overpriced out of season strawberries we see on our supermarket shelves at Christmas. Jam is a shadow of the memory of Summer, preserving gluts of fruit has been a ritual in world kitchens for thousands of years, whether it be drying, potting, jam-making or, more recently freezing (although again, I’m not so keen as you end with a pale example of what first went in). You cannot compare a decent jam to a bowl fresh fruit and it would be wrong to do so.

Therefore, perhaps the Britain’s Food Weeks have a place, not so much in promoting awareness and purchase of produce, but in highlighting what shouldn’t be around….it is all extremely confusing…but Happy National Seafood Week anyway!!!